Originally from Hong Kong, Tiffany Vong studied at Glenalmond College, Perthshire from the age of 13 where she started learning the organ with Robert Gower and Matthew Beetschen. Appointed the school's organ scholar, Tiffany gained experience in both choral direction and organ playing. Alongside her organ studies, Tiffany also had regular piano and singing tuition. She was awarded the Ralph Kerr Quaich for Keyboard Achievement in her last 3 years at Glenalmond.

Tiffany read music at Oriel College, Oxford (2011-2014) where she was organ scholar under Director of Chapel Music, Dr. David Maw. She also studied organ with Stephen Farr and choral conducting with Paul Spicer. Tiffany has toured with the Oriel College Chapel Choir throughout Europe and the UK, and has also participated on an organ scholar study trip to France. She is an Associate of the Royal College of Organists (ARCO).

Tiffany has completed a Master of Music at the Royal Conservatoire of Scotland where she was supported by scholarships from the RCS Trust and ABRSM, studying organ with David Hamilton and harpsichord with Jan Waterfield. Whilst at the RCS, she was highly commended and commended for the Governors’ Recital Prize for Keyboard and the Bach Prize respectively. She was also awarded the Agnes Miller Harmony and Counterpoint Prize and the British Reserve Insurance Prize for Early Music.

In addition to choral conducting, Tiffany is also active as a solo recitalist, accompanist and continuo player. 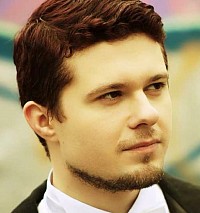 Maciej Granat is a Polish pianist and composer, currently based in Glasgow. Maciej performs regularly as a soloist and chamber musician in Poland, Italy, Germany, USA and UK. He went on concert tours to the USA three times and performed, amongst others, in the New York Carnegie Hall. He gave the Polish premiere performance of Joaquin Rodrigo's Piano Concerto with the Baltic Philharmonic in Gdansk and performed Kabalevsky's 2nd Piano Concerto with the RSNO in Glasgow. He also performed in Warsaw during the Mozart Plus Festival, a part of the Klavier Festival Rurh. His concerts have received very good reviews from both critics and audiences.  His recordings of Kabalevsky's piano music were broadcasted on BBC3 radio. Maciej was also the recipient of the Royal Conservatoire of Scotland prestigious Emergent Artist programme and held the Young Artist in Residence post.

Composing since his early teenage years, Maciej has had pieces performed at the Silesian Tribune of Composers and the Musical Arcades Festival. His work "Pogoda ducha" (‘Cheerfulness’) was commissioned by ‘Gama’ artistic agency and the 'Distant nocturne' op.30 for piano was premiered during the Levoca Piano Festival in Slovakia, with Thomas Kamieniak as the soloist.

Maciej has been playing the piano since the age of four and before moving to UK was a student of Karol Szymanowski Music Academy in Katowice under Prof. Joanna Domanska. At the Birmingham Conservatoire he studied under Malcolm Wilson and Philip Martin and graduated with a First Class Bachelor of Music degree. Maciej continued his studies in Glasgow at the Royal Scottish Academy of Music and Drama (now Royal Conservatoire of Scotland) where he graduated with Distinction from a Postgraduate Diploma and Master's Course in Performance, under the tutelage of Jonathan Plowright.

For Cunninghame Choir's May 2015 concert, Maciej has composed his most personal work to date: a Requiem Mass in memory of his aunt and childhood piano teacher, Bozena Lanowska. Maciej describes the music as deep, heavy and very dramatic. Set to original Latin mass texts and poems by Polish romantic poet, Cyprian Kamil Norwid, the music style spans from modernistic chaos through evocative emotional expressionism to film-like music.

Please see our concerts page to view the recording of our performance of Requiem, which was part of Glasgow's West End Festival.