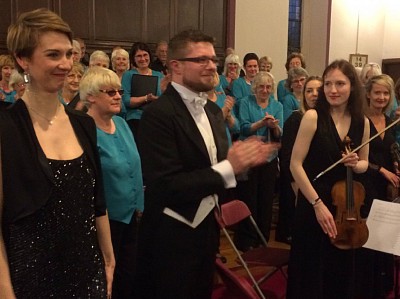 Cunninghame Choir is developing a

reputation for its innovative themed concert programmes, which often draw together music from very different periods, countries or even genres under an overarching title or idea. This enables us to explore all sorts of repertoire, from folk songs and spirituals, through hymns and musical numbers, to large-scale choral works with soloists and orchestra. Details of our upcoming events and concerts can be found below.

Picture: A delighted Maciej Granat after our world premiere performance of his Requiem.

Our rehearsals are open to all and we welcome new and returning members alike. No prior ability to read music is required and we do not hold auditions.  Practice MP3s and CDs are available to aid familiarity and confidence. We are currently rehearsing for our upcoming Come and Sing day and evening concert, A Faure Soiree.

A short performance of our afternoon's 'Come and Sing' repertoire starts off our evening programme.

Tickets by donation and all sale proceeds in aid of the DEC Ukraine Appeal. (suggested £5 minimum donation)

Drop us a line via our Contact us page or Facebook page for details on how to join in.

The following programmes from our last few seasons gives an idea of the Choir's range and versatility.

To mark St. Andrews Day this programme celebrated all things Scottish; its history, heritage, regions and poetry. Emotive suites such as Tom Cunningham and Alexander McCall Smith's Scotland at Night and Ken Johnson's I Landed with Seven Men, the story of the Bonnie Prince, Charles Stuart's final Jacobite Rising of 1745, were interlaced with new compositions by young composers Maciej Granat (Three Scottish Songs) and Lisa Robertson (From Bunessan). Other well-known traditional Scottish songs from the ancient to modern were also performed. Download our A Scottish Celebration! programme here.

A programme all about animals and nature, centred around Eric Whitacre's hugely fun Animal Crackers (based on poems by Ogden Nash) and Andrew Carter's fantastic Benedicite, with further contributions from Aaron Copeland, John Taverner, Irving Fine and others. Download our Animal Crackers! programme here.

Here we performed a delightful programme of contemporary carols and seasonal folk songs, featuring Peter Warlock's quirky Three Carols and Vaughan Williams' enchanting Winter Folk Songs for upper voices. Music by Lauridsen, Rutter, and Chilcott added an exciting range of colours, styles and moods, ranging from the contemplative to the exuberant. A rousing celebration and reflection on the festive season! Download our A Folk Christmas! programme  here.

Inspired by the 150 deeply spiritual and symbolic Psalms of the Bible this programme included psalm settings from the Baroque period through to the 20th Century, including Alessandro Scarlatti's uplifting Dixit Dominus, Montiverdi's Cantate Domino and Lili Boulanger's dramatic and exciting Psalm 24. Support from rising stars of instrument and voice from the Royal Conservatoire of Scotland added a real air of class to this beautiful programme. Download our Psalm Fest! programme here.

An uplifting programme of nocturnal carols and songs to celebrate the peace and magic of the festive season. Well known 'night' carols were interspersed with songs from Benjamin Britten's Ceremony of Carols and Bob Chilcott's On Christmas Night. The evening closed with the hugely enjoyable 'Twas the night before Christmas! arrangement by Ken Darby. Download our On Christmas Night concert programme here.

A thoroughly enjoyable programme of jazz-infused music for choir and jazz ensemble, including the beautifully melodious Little Jazz Mass by Bob Chilcott, Duke Ellington's Come Sunday, I Have a Little Shadow by Jazz Master Dave Brubeck, and a selection of Beach Boys greats. Will Todd's very exciting Mass in Blue was a joy to perform alongside super-sassy jazz soloist Lisa Cassidy. Download our In Blue concert programme here.

Here we gave a thoroughly upbeat celebration of Advent in a concert of negro spiritual and gospel favourites including Wasn't that a Mighty Day, Rise up Shepherd and Go tell it on the Mountain and featuring John Rutter's rousing medley, Feel the Spirit. Lynn Bellamy performed the mezzo-soprano solo parts beautifully. Download our Gospel Noel concert programme here.

Spanning five centuries, from the Baroque to the present day, our programme comprised works written in memory of others, including Beethoven's Elegischer Gesang, Buxtehude's Mit Fried und Freud, Eric Whitacre's Sleep and Sheena Philip's Music for Jill, exclusively licenced to Cunninghame Choir. The concert highlight was Maciej Granat's Requiem, written in memory of his aunt, Bozena Lanowska, his first piano teacher. Download our In Memoriam concert programme here. Watch the recording of Requiem below.

Commemorating the extraordinary Christmas Truce of 1914, this programme comprised anthems and carols from the UK (Christians Awake, Sleep Holy Babe), France (Les Anges Dans Nos Campagnes, Cantique de Noel), Austria and Germany (O Tannenbaum, Stille Nacht) interspersed with readings of eye-witness accounts of this magical and peaceful event that took place in the midst of a bloody war. Further information and reviews of this concert can be found on our Facebook page.

In commemoration of 2014 marking 100 years since the start of World War 1 we chose an anti-war theme, including Sir Richard Rodney Bennett's SATB plus 'cello piece, A Farewell to Arms, John Rutter's uplifting arrangement of Down by the Riverside and Karl Jenkins' massive choral number, The Armed Man. Please read our Reviews of this concert.

A performance of Ken Johnston's arrangement of some very well known Scottish folk songs - I Landed with Seven Men - telling the story of Bonnie Prince Charlie and the Jacobite Rebellion. Also performed is a work commissioned by the British Federation of Young Choirs - John Gardner's A Burns Sequence, which sets a selection of poems by Robert Burns to music. The programme also featured pieces by Alasdair Nicolson, Sally Beamish and Tom Cunningham, with texts by Robert Louis Stevenson and Alexander McCall Smith.

A programme that is a celebration of British choral music centred around a number of exciting works for voices, brass, percussion and organ: Jonathan Wilcock's rousing Magnificat and John Rutter's Gloria.

A celebration of Christmas music from around the globe, with works from Britain, China, Africa, Australia, Germany and more.

Handel, Bach, Mozart, Schubert...some of the most cherished names in choral music are brought together in this programme, with classics like the Mozart Coronation Mass heard alongside lesser-known masterpieces including Bach's Cantata 150 - Nach dir, Herr, verlanget mich.

In a concert marking the fiftieth anniversary since the publication of Oxford University Press's ever popular "Carols for Choirs", we sing some of this series best known Christmas pieces, before taking on some great British choral Christmas favourites: Finzi's In Terra Pax, Vaughan-William's Fantasia on Christmas Carols and Handel's ubiquitous Messiah.

The much-loved Faure Requiem Mass in its original five-movement version is heard alongside John Rutter's 1985 Requiem, with short choral gems by Franck and Saint-Saens.

A programme combining winter-themed pieces such as Elgar's The Snow, Chilcott's Midwinter and Rutter's When Icicles Hang, with Randall Thompson's beautiful settings of country poems by Robert Frost - Frostiana.

Every piece in this programme is connected to Italy in some way or another. Great Italian choral works by Puccini (his Messa di Gloria) and Vivaldi (the Credo in E minor) are juxtaposed with pieces by Mozart and Liszt inspired by Italy.

An American programme of two halves; the first features pieces by American composers related to the winter season and Christmas, including Amy Beach's Bethlehem - A Christmas Hymn and O magnum mysterious by Morton Laurisdsen, while the second centres on folk, country and Broadway songs from across the pond, with music by Copeland, Barber and Bernstein.

A programme incorporating some of music's most uplifting and exciting choral works, featuring Gloria by Poulenc and Vivaldi, and settings of the Jubilate Deo by English composers John Ireland and Sir Charles Villiers Stanford.

A St. Andrew's Day concert celebrating a very famous partnership, combining a host of French Christmas carols and Faure's evergreen Cantique with traditional folk songs and lullabies from all over Scotland.